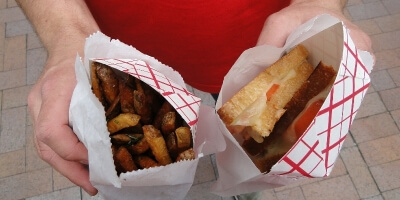 We are thrilled to welcome rising blog star Andy Bass to the MyUntangled family. He said he was dying to run around and try food trucks in the city – and who could say no to that? Enjoy his first post and first in a series we’re calling…

Normally when one thinks of a food truck, two thoughts come to mind—An overweight construction worker almost running out of his boots from wherever he is on the jobsite yelling “THE ROACH COACH IS HERE!!!!!” or a grimy looking vending truck parked in a sketchy lot with drunks falling over one another waiting to add a fine layer of grease to a belly full of booze. Yes, neither image is appealing. However, recently (the past two years or so) these kinds of perceptions have been changing due to a new take on the traditional food truck. Being labeled as “Gourmet Food Trucks,” entrepreneurs have taken the classic idea of a food truck and polished up the image and quality of food being served.

So what sets the new fleet of trucks apart from their traditional counterparts? For starters, their looks. Gourmet food trucks, much like the food they serve, have taken presentation into account. Most, but not all, trucks have created a branding and niche menu around a certain concept that becomes just as important to the truck’s ethos as its food.

Having learned about this resurgence in food trucks a year or so ago I always wanted to venture my way to “The City” and hit a couple of them up. Luckily for me, the folks here at Myuntangledlife were as excited to send me, as I was to be going. That being said, this post is going to be part of a trilogy, possibly saga, of the gourmet food trucks you need (or don’t need) to know about in the great city of Boston.

For the first trip into the city, my partner-in-gluttony, Beth, accompanied me. We decided the best course of action was to only sample two trucks at a time—don’t get me wrong, I could do more, but for the sake of our readers, I wanted to leave you wanting more. The first two trucks to tackle were Go Fish! and Roxy’s Grilled Cheese.

[singlepic id=536 w=280 float=left]Food trucks may seem to casually appear throughout the city but there is definitely a method to the madness. First of all, they must be licensed and they are only allowed park in certain spots at certain times. We scoped out which Boston food trucks we wanted to try and where they would be based on the schedule on the City of Boston website. Taking the commuter rail into North Station there was a bit of a walk to get to Go Fish!, which on this day, was located in the Financial District at Milk and Kirby. Upon getting to the truck there were two things that grabbed my attention. Most notably it would be their truck; a perfect exemplification of embodying the new method of branding. Decorated with a seascape, a light blue background with bright coral and seaweed boasting a couple fishes, my attention was immediately drawn towards it. As I got closer, the next object that caught my eye was their elaborate table adorned with everything from ketchup to malt vinegar to chipotle mayo and red pepper garnishes.

Giving the menu a once, then twice over I saw a few dishes that caught my eye, but nothing that reeled me in. Realizing that I still had another truck to sample, I kept it simple; 2 lobster sliders and a side of Crispy slaw—this came in a little over $9.00 (eh). After hearing my name, I stepped up and grabbed my order. My initial reaction was they forgot one of my sliders since I was handed a plastic wrap and 8 oz. container, but when I brought this to the attention of the proprietor he informed me that they were wrapped together. Sliders, on average, are supposed to be about 3 inches and after unwrapping them, it turned out these were less than average—both, side-by-side, probably came close to three inches, maybe a little bigger. The 8 oz. container of cole slaw, on the other hand, was packed full.

So I got right to it starting with the sliders. The lobster meat was no doubt fresh and the mixture of mayo to celery was spot on with a perfect blend of seasoning. It took me under a minute to put down both the sliders, but I was left wanting more—mostly due to the fact they were so small… mostly. Don’t get me wrong, the sliders were good, but they didn’t blow me out of the water. Next, I dug right into the coleslaw, which was honestly, just your run of the mill, standard, slaw. Nothing about it jumped out at me or made me long for more. (A note from Beth on the slaw: the cabbage was shredded, about 1/4 of an inch wide and some of the pieces were 6 – 8 inches long, which made for difficult eating.)

All around, Go Fish was good, but nothing I would go out of my way for. If I worked in the city, I could imagine myself stopping there if I needed lunch, but would pass it by if there were a long enough line. Bottom line—it’s good, but not the catch of the day.

[singlepic id=545 w=280 float=right]Considering the sliders and slaw left me still wanting more, we headed to our next destination, Roxy’s Grilled Cheese. Now, let’s get one thing straight, I was beside myself to get there. Ever since the food truck takeover, Roxy’s has been a truck that I’ve wanted to go to considering they were contestants on Food Network’s “The Great Food Truck Race.” As we rounded the corner for Rowes Wharf, I saw the big yellow truck there in all its glory. Much like Go Fish!, Roxy’s truck is hard to miss. It’s bright yellow with their signature logo, a punked out “Wendy” eating a grilled cheese sandwich with a skull & bones tattoo on her left shoulder.

Giving their menu much attention, I noticed the sandwich I wanted wasn’t listed, that being a Reuben (my favorite). Realizing that if it wasn’t on the board, it probably wasn’t offered, so I chose another sangwich as a backup plan. Getting up to the counter I inquired about the Reuben, which as it turns out, was not available that day (a good thing to keep in mind if you look at an online menu beforehand). Not being upset in the least bit; I ordered “The Rookie Melt,” a basic Vermont cheddar and tomato melt, as well, as a side of their hand cut truffle fries—both coming a little over $9.00 (hmmmmmm). Beth, upon getting there, became just as excited as I was. After looking the menu over she settled on the “Mighty Rib Melt” and we took our stand amongst the others that were waiting.

Hearing my name get called, I stepped right up and grabbed my bagged fries and sandwich, which immediately filled me with joy. Taking a few fries out of the bag to sample before sitting down, I knew I was in for a real treat. The fries were cooked to perfection, they weren’t soggy, and they weren’t rock hard—they were just right, crunchy and full of flavor. Still though, I had my eyes set on the sandwich.

Sitting down finally (we went across the street and sat on some benches at Rowes Wharf) and taking the sandwich out of the bag I assessed the grilled cheese. The bread was cooked perfectly, and trust me, there is a fine line between being undercooked and overcooked. Nothing was burned or saturated with the butter from the grill; the sandwich had a nice brown tint to it. Taking the first bite was pure bliss, everything came together nicely, the cheese didn’t overpower the tomato and vice versa, while the bread crunched just right.

Seeing that both sandwiches came cut in half, Beth and I decided to share and, boy, am I glad we did. I thought “The Rookie,” a minimal sandwich was fantastic, but I wasn’t ready for the “Mighty Rib Melt.” The first bite of the braised short ribs caught me off guard. It was juicy and very soft, personally the way I like it. Nothing’s worse than having to chew and chew and chew because a rib is dry and tough. Add the flavor of the caramelized onion and, of course, cheese to the mix, this made it one hard sandwich to forget. (And, honestly, I still find myself thinking about it.)

So, what’s the final verdict? Roxy’s Grilled Cheese is a must stop. If I worked in the city, I would make this a stop at least every two weeks (I don’t lunch out much). The friendly atmosphere of their workers and the quality of food makes this worth checking out. From my experience, just like their logo, a great grilled cheese brings out the child in all of us. (A note from Beth: Roxy’s was yummy and a very well-run truck. The orders are hand-written, called out to the cooks and then hung on a rack in the order they came in. We were there at peak lunch time so things were busy and periodically the crew would run through what was stacked up to make sure what was on the grill matched up, very efficient.)

Until next time, keep trucking along.

tagged as: around the towns, food trucks, reviews 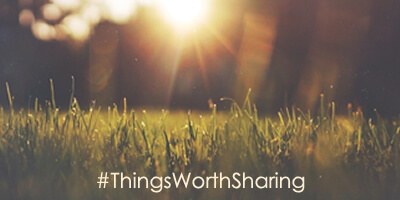 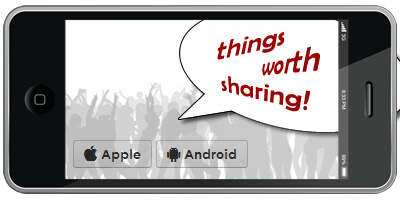 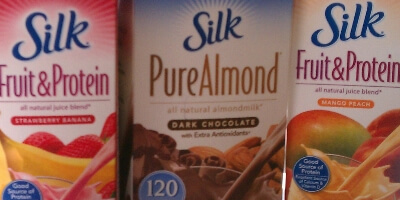